Last Thursday night at the First Tee marked my 100th Open Mic since taking over from Josal. We've got a good core of regular musicians and a fairly steady showing of new and occasional players as well.  One of the things I really like about The First Tee Open Mic is the number of people that come in to listen.  It's always a plus to have an appreciative audience when you are on the stage and adding our guests to First Tee's regular folks is just the mix to make it happen.  So, once again I would like to thank everyone for supporting local music and especially Open Mics.


We opened the stage with Jason Hykle,
receiving some backup from Keith Craik. 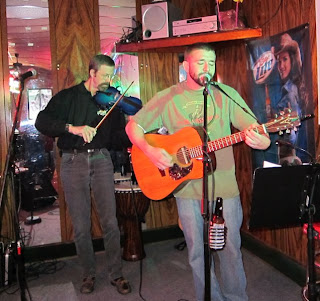 This was Steve Orta's first time at The First Tee, but he is no stranger to my open mics. 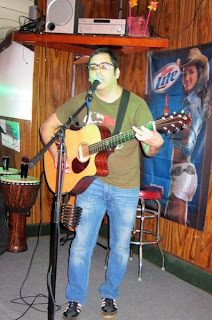 Brandon Smith was up next with a fun set of original country songs. 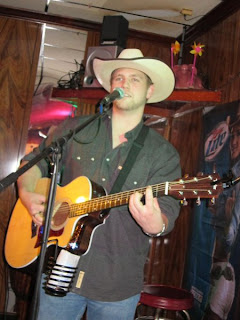 We then moved on to TC Smythe and Stephen Daly.
Sunny Side Up? Slap & Tickle?  Whatever they call themselves they are always entertaining. 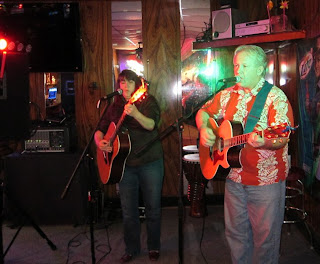 Chris Mitchell is another first timer to The First Tee. Chris plays some excellent jazz on his Soprano Sax. 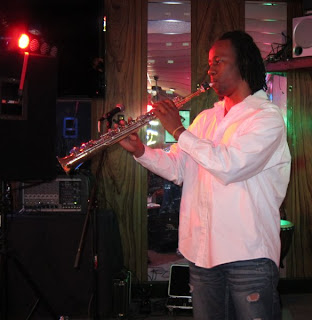 Bruce Ross was a nice follow to Chris with his rich gospel voice and inspirational songs. 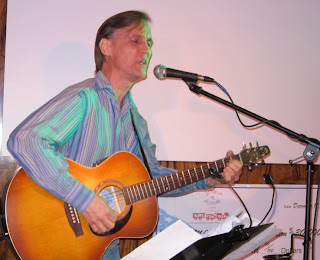 Larry Sepulvado was next up to "play some songs for ya".  Larry's originals are always crowd pleasers. 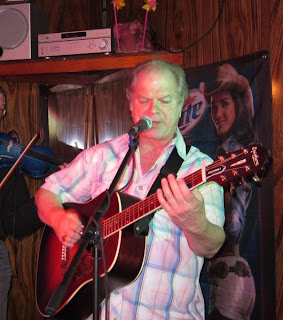 Josh Wager is back in full swing as a regular open mic player.  It's always nice have him on the stage. 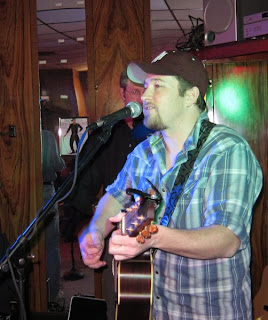 Although Hunter Nelson is a favorite regular and Rhew Fletcher has been out at previous venues this is the first time we've gotten to hear Mythical Jungle Lake. Joining Hunter and Rhew was Benji Cooksey adding some fine harmony to the mix. 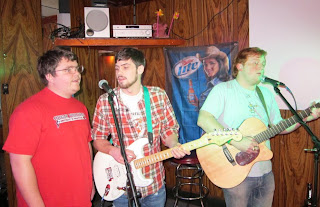 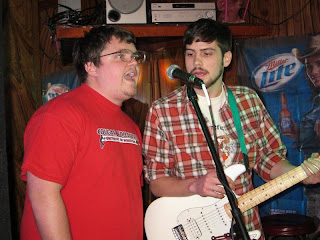 Chrysa Ford is a fairly regular spectator at open mic, but this night she decided to get up and sing a little a Capella number.  Very cool. 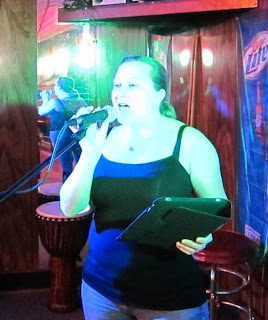 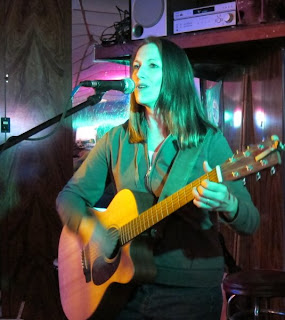 and then Andrea Thompson closed us out for the night. 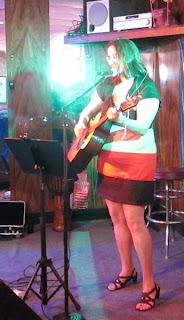 Also special thanks to Keith Craik for backing up so many other musicians on his fiddle. 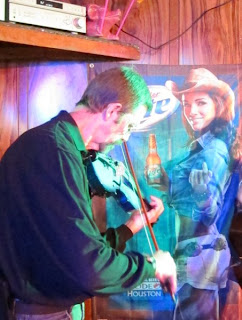 So there you have it!  A great way to mark 100 Open Mics.  It's alway a good time at The First Tee, but this great group of musicians and fans make this Open Mic very special.  Many thanks to all.
Posted by Rusty Winz at 7:51 PM 0 comments

What a fun night we had last Thursday with an excellent turnout of musicians and fans.  We are really building a good following of listeners with the fine talent that has been playing at The First Tee Open Mic.  We managed to get the attention of America's Got Talent!  They sent out a representative last week to promote their open auditions and to sign up people for scheduled auditions.  As things turned out Josh Wager got a scheduled audition and I've heard through the grapevine (OK it was on Facebook)  that our friend Donny Sands went down to the open auditions.  I have no doubt both of them represented us well.

Besides the presence of the lovely Esmerelda from America's Got Talent we had a great line up of music.


We started the evening as we often do with Jason Hykle,
backed up by Brandon Jentzen and Keith Craik. 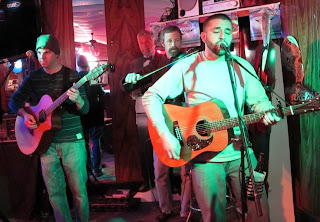 Brandon then took his turn at the microphone, again getting
some back up assistance from Kieth Craik 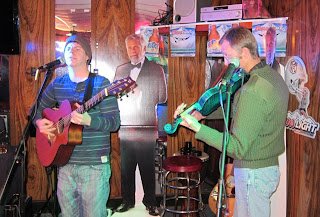 Dennis Glendenning was up next making his first appearance on the First Tee Stage. 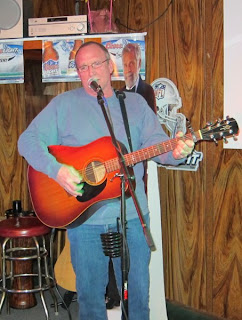 Willie B followed  and rocked the house as he is known to do. 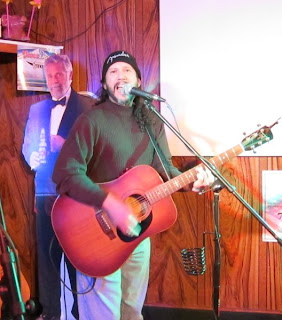 Hunter Nelson was next up and has become a regular favorite here. 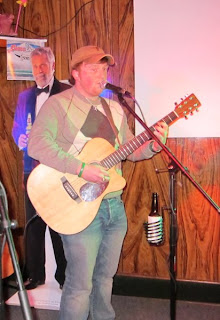 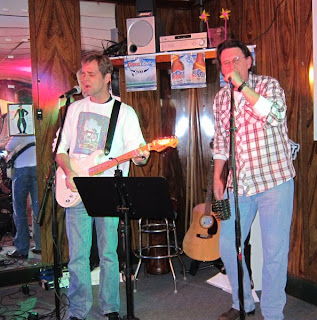 C-4 Ebrahimi and Guitar Dave came up next with a fine mix of tunes. 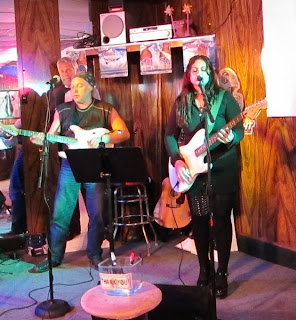 Amy Waters then took the stage 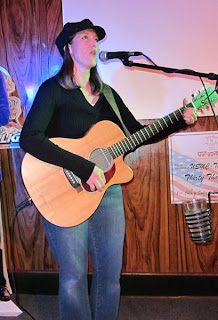 and was followed by Andrea Thompson.
Apologies to Andrea.  It seems I always miss someone in the photos.
This week it was Andrea.
John P. Barton made a rare appearance at the First Tee. And
who is that interesting fellow looking on from the back? 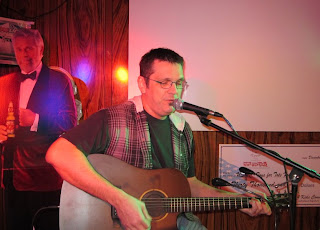 and then Josh Wager took the stage garnering some attention from Esmeralda. 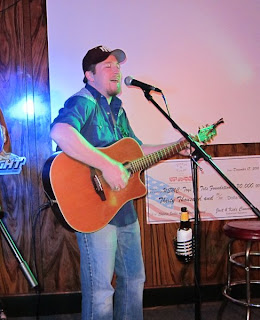 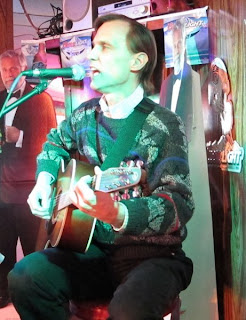 and Doug Michaels wrapped up the evening
with backup from Guitar Dave and Bruce Ross. 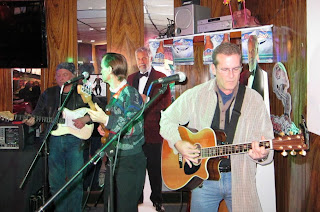 Many thanks to all of the musicians that keep coming out and keeping this open mic alive.
Also a HUGE thank you to over a dozen folks that made it a point to show up just to listen.
Join us every Thursday night at The First Tee for a great Acoustic Music Open Mic.
Posted by Rusty Winz at 8:41 PM 0 comments